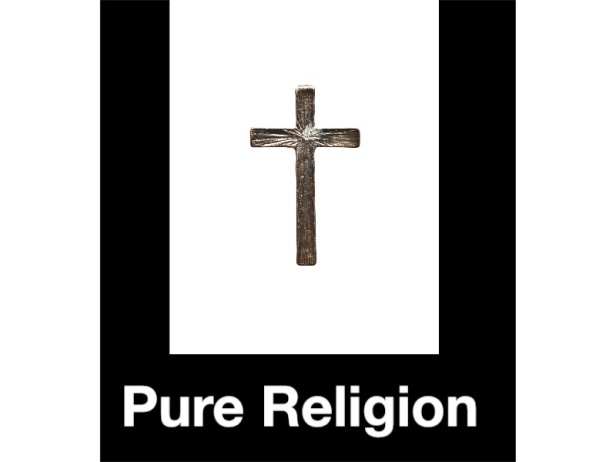 I’m not a religious person in the sense of what most people think of as being religious. Religious people turned me off to Christianity when I was a teenager. They say one thing on Sunday and do the opposite on Monday. If that’s what religion does to you, I wanted no part of it. I eventually embraced atheism and preached it with evangelistic fervor. So, what am I doing writing a blog about God’s Amazing Grace if I’m not religious?

The Apostle James wrote only one letter that we know about, but it was probably the first writing of all the New Testament letters. James wrote his epistle several years after Jesus Christ, James’ half-brother, rose from the dead and returned to His Throne in Heaven. James had risen to become the primary leader of Jewish believers in Israel. He wrote his letter to “the twelve tribes which are scattered abroad.” Jews were scattered all over the world because of many dispersions and captivities from the centuries before James’ day. Thousands of Jews who believed that Jesus Christ was their Messiah were also scattered after the murder of Stephen (Acts 7) and the persecution of Saul (Acts 8).

The letter of James to the “twelve tribes which are scattered abroad” began an amazing period of apostolic letter writing that lasted 40 years. Most of the New Testament was written in the first 20 years with John’s letters coming at the end of the 40-year period. Each letter from the apostles addressed different needs of the people who received the letter. Thanks to God’s provision and direction, we now have all of those letters in the wonderful Book we call the New Testament.

James addresses a lot of topics in his short letter to the “twelve tribes,” but he had a primary theme and it was on being “religious.”

“If anyone among you thinks he is religious, and does not bridle his tongue but deceives his own heart, this one’s religion is useless.”

The Jews were a very “religious” people. They believed their religion was directly from the one and only God and that all other religions were beneath them. Remember that the Jews had worshiped many gods centuries before, but they learned a hard lesson and held fast to the true religion of Judaism. However, the Jews of James’ day, even those who trusted in Christ as their Messianic Savior, were arrogant, proud and unloving. They participated in every imaginable sin of the heart while speaking and singing words of praise to God.

James wasted no time in getting to the heart of the Jews’ problems. He addressed his remarks to all of the people who thought of themselves as being “religious.” James said that if they thought they were religious, but didn’t bridle their tongue, they were deceived and their religion was useless. Wow! What a thing to say to religious people: “your religion is useless.” My guess is those words didn’t go down well with the Jews who read James’ letter. How dare he say that their religion was useless.

What James does in his letter is compare the outward acts of religion to the inward heart of religion. “If anyone among you thinks he is religious, and does not bridle his tongue but deceives his own heart, this one’s religion is useless.” A Jew who said they were “religious,” but could not bridle (chalinagogon – to lead by a bridle, to restrain, hold in check) their tongue (glossan – organ of speech) had a useless (mataios – void of result) religion. Think about that! A person who did all of the correct outward things to worship God (i.e. attended church regularly, taught Sunday School, sang in the choir, served on church committees, preached from the pulpit) but could not control their speech, had a religion that was void of result. It was useless. (Reminds me of what Paul wrote in 1 Corinthians 13:1-4)

Here are several examples of what the Jews of James’ day should have known about God’s love for the fatherless and widows.

“You shall not afflict any widow or fatherless child.”

“He administers justice for the fatherless and the widow, and loves the stranger, giving him food and clothing.”

“And the Levite, because he has no portion nor inheritance with you, and the stranger and the fatherless and the widow who are within your gates, may come and eat and be satisfied, that the LORD your God may bless you in all the work of your hand which you do.”

“And you shall rejoice in your feast, you and your son and your daughter, your male servant and your female servant and the Levite, the stranger and the fatherless and the widow, who are within your gates.”

“You shall not pervert justice due the stranger or the fatherless, nor take a widow’s garment as a pledge.”

“Cursed is the one who perverts the justice due the stranger, the fatherless, and widow.’ And all the people shall say, ‘Amen!”

“You have sent widows away empty, And the strength of the fatherless was crushed. Therefore snares are all around you, And sudden fear troubles you.”

“You are the helper of the fatherless.”

“A father of the fatherless, a defender of widows, Is God in His holy habitation.”

“Defend the poor and fatherless; Do justice to the afflicted and needy.”

“The LORD watches over the strangers; He relieves the fatherless and widow;  But the way of the wicked He turns upside down.”

“Your silver has become dross, Your wine mixed with water. Your princes are rebellious, And companions of thieves; Everyone loves bribes, And follows after rewards. They do not defend the fatherless, Nor does the cause of the widow come before them. Therefore the Lord says, The LORD of hosts, the Mighty One of Israel, ‘Ah, I will rid Myself of My adversaries, And take vengeance on My enemies.”

“Woe to those who decree unrighteous decrees, Who write misfortune, Which they have prescribed To rob the needy of justice, And to take what is right from the poor of My people, That widows may be their prey, And that they may rob the fatherless.”

“As a cage is full of birds, So their houses are full of deceit. Therefore they have become great and grown rich.  They have grown fat, they are sleek;
Yes, they surpass the deeds of the wicked; They do not plead the cause, The cause of the fatherless; Yet they prosper, And the right of the needy they do not defend. Shall I not punish them for these things?’ says the LORD. ‘Shall I not avenge Myself on such a nation as this?”

“For if you thoroughly amend your ways and your doings, if you thoroughly execute judgment between a man and his neighbor, if you do not oppress the stranger, the fatherless, and the widow, and do not shed innocent blood in this place, or walk after other gods to your hurt, then I will cause you to dwell in this place, in the land that I gave to your fathers forever and ever.”

“Thus says the LORD: ‘Execute judgment and righteousness, and deliver the plundered out of the hand of the oppressor. Do no wrong and do no violence to the stranger, the fatherless, or the widow, nor shed innocent blood in this place.”

“Look, the princes of Israel: each one has used his power to shed blood in you. In you they have made light of father and mother; in your midst they have oppressed the stranger; in you they have mistreated the fatherless and the widow. You have despised My holy things and profaned My Sabbaths.”

“For in You the fatherless finds mercy.”

“Do not oppress the widow or the fatherless, The alien or the poor. Let none of you plan evil in his heart Against his brother.”

“Learn to do good;  Seek justice, Rebuke the oppressor; Defend the fatherless, Plead for the widow.”

James made an excellent point in his letter about God’s Heart toward orphans and widows. He loves and honors them and wants His people to take good care of them “in their distress” (NIV). It was hypocritical of a Jew who confessed Christ to worship God outwardly but not care for orphans and widows who were suffering. Religion that was pure (kathara – clean, pure by cleansing, unsoiled) and undefiled (amiantos – undefiled, unpolluted, unstained, unsoiled, free from contamination) had to include ministering to the needs of children without parents and women whose husbands had died.

This pure religion and undefiled also included keeping oneself “unspotted” from the world. The idea of being unspotted (aspilon – unstained, without blemish or spot) was a familiar theme to Jews. They knew that the sacrificial lamb had to be a male “without blemish” and “the whole assembly of the congregation of Israel shall kill it at twilight.” (Exodus 12:4-6) Messianic Jews of James’ time understood that Jesus Christ was the Lamb of God “who takes away the sin of the world!” They knew what James meant when he said they should be “unspotted from the world.” The message was clear that they should live holy lives committed to being like Christ in word and deed.

The rest of James’ letter to the “twelve tribes which are scattered abroad” explained what pure religion and undefiled meant. Here’s a quick summary:

I am attracted to pure religion. It looks good and sounds right. The Lord is pleased with it.

Now, before we become proud about having a pure religion and look down on those who don’t have what we have, we need to remember a couple of key elements from James’ letter:

“God resists the proud, But gives grace to the humble.”

“Brethren, if anyone among you wanders from the truth, and someone turns him back, let him know that he who turns a sinner from the error of his way will save a soul from death and cover a multitude of sins.”

God gives us a new opportunity every morning to serve Him and others in love. What will we do today?