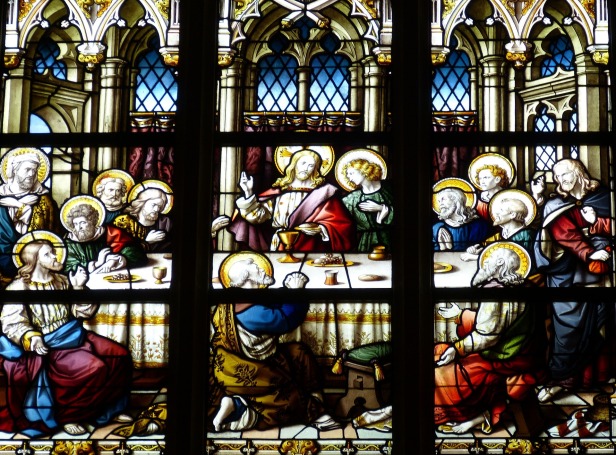 Most of the apostles were dead by the time the Roman army destroyed Jerusalem. Luke’s history of the Church, the Book of Acts, ends with Paul and Peter still alive and Jerusalem still standing, so Acts was written sometime before 70 A.D. Church historians believe the Roman Emperor Nero ordered Peter’s death about 64 A.D. and Paul’s death about 67 A.D. That left the Apostle John to finish communicating the Word of God to the world. Historians believe John died of natural causes by or before 100 A.D.

John’s Letters and the Revelation tell us quite a bit about the Church at the end of the 1st Century. John doesn’t write specifically about the Lord’s Supper, but we know there were many enemies inside and outside the Christian churches – just as Paul had prophesied. Here’s what Paul told the leaders of the Ephesian would happen to their church after his death.

“For I know this, that after my departure savage wolves will come in among you, not sparing the flock. Also from among yourselves men will rise up, speaking perverse things, to draw away the disciples after themselves. Therefore watch, and remember that for three years I did not cease to warn everyone night and day with tears.” Acts 20:29-31

Now, look at what Jesus told John to write to the leaders in the Ephesian church about 30 years after Paul’s prophesy.

“I know your works, your labor, your patience, and that you cannot bear those who are evil. And you have tested those who say they are apostles and are not, and have found them liars; and you have persevered and have patience, and have labored for My name’s sake and have not become weary. Nevertheless I have this against you, that you have left your first love. Remember therefore from where you have fallen; repent and do the first works, or else I will come to you quickly and remove your lampstand from its place—unless you repent. But this you have, that you hate the deeds of the Nicolaitans, which I also hate.” Revelation 2:2-6

Just as Paul had prophesied would happen after his death, the Ephesian church was dealing with attacks from savage wolves inside and outside the church. This is the same church Paul started many years earlier (Acts 19:1-10). We see the same kinds of things happening with the churches in Pergamos, Thyatira, Sardis, and Laodicea. Satan is attacking the Church with all his strength.

It’s 101 A.D. All of the Lord’s apostles are dead, so who’s in charge of the direction of the Christian Church going into the 2nd Century? Many of the leaders of the 2nd Century Church were disciples of the apostles or had been taught by those disciples. They were pastors, evangelists and apologists who taught and preached and wrote. What they taught and wrote in the 2nd Century guided the Church in many areas of doctrine and practice. For the purpose of our study here, we’re interested in their teachings about the Lord’s Supper and how the 2nd Century Church partook of the Supper. Did they hold to the teaching of Paul or did they stray?

It’s obvious from the 2nd and 3rd century Christian documents I’ve read that the leaders of the early Church held a high view of the Lord’s Supper. Most of the writers used the term “eucharist” (eucharistia – thankfulness, thanksgiving) when speaking about the Lord’s Supper. Here are some examples.

“Take note of those who hold heterodox opinions on the grace of Jesus Christ which has come to us, and see how contrary their opinions are to the mind of God … They abstain from the Eucharist and from prayer because they do not confess that the Eucharist is the flesh of our Savior Jesus Christ, flesh which suffered for our sins and which that Father, in his goodness, raised up again. They who deny the gift of God are perishing in their disputes.” Epistle to the Smyrnaeans, Ignatius of Antioch

“It is allowed to no one else to participate in that food which we call Eucharist except the one who believes that the things taught by us are true, who has been cleansed in the washing unto rebirth and the forgiveness of sins and who is living according to the way Christ handed on to us. For we do not take these things as ordinary bread or ordinary drink. Just as our Savior Jesus Christ was made flesh by the word of God and took on flesh and blood for our salvation, so also were we taught that the food, for which thanksgiving has been made through the word of prayer instituted by him, and from which our blood and flesh are nourished after the change, is the flesh of that Jesus who was made flesh. Indeed, the Apostles, in the records left by them which are called gospels, handed on that it was commanded to them in this manner: Jesus, having taken bread and given thanks said, `Do this in memory of me, this is my body.’ Likewise, having taken the cup and given thanks, he said, `This is my blood”, and he gave it to them alone.” Apology 1, 66-67, Justin Martyr

“Let no one eat and drink of your Eucharist but those baptized in the name of the Lord; to this, too, the saying of the Lord is applicable: Do not give to dogs what is sacred.” Teaching of the Twelve Apostles (the Didache)

“We take anxious care lest something of our Cup of Bread should fall upon the ground.” The Crown, Tertullian

“We offer him what is his, and so we proclaim communion and unity and profess our belief in the resurrection of flesh and spirit. Just as bread from the earth, when it receives the invocation of God, is no longer common bread but the Eucharist, made up of two elements, one earthly and one heavenly, so also our bodies, in receiving the Eucharist, are no longer corruptible, for they have the hope of resurrection.” Against Heresies, Irenaeus

“We are not people with ungrateful hearts; it is true, we do not sacrifice … to such beings who, far from bestowing their benefits upon us, are our enemies; but to God who has bestowed upon us an abundance of benefits … we fear being ungrateful. The sign of this gratitude towards God is the bread called Eucharist.” Contra Celsum, Origen

“Finally, the sacrifices of the Lord proclaim the unity of Christians, bound together by the bond of a firm and inviolable charity. For when the Lord, in speaking of bread which is produced by the compacting of many grains of wheat, refers to it as His Body, He is describing our people whose unity He has sustained, and when He refers to wine pressed from many grapes and berries, as His Blood, He is speaking of our flock, formed by the fusing of many united together.” Letter of Cyprian to a Certain Magnus, Cyprian

What happened to the practice of the Lord’s Supper as the Church grew centuries from its beginning? We’ll look at that in the next part of our study.