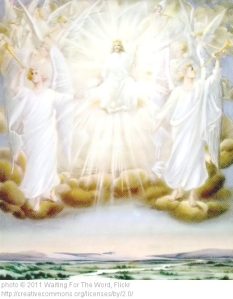 We can experience victory in every aspect of life. That includes personal and interpersonal matters of life: personal habits, addictions and illness, family problems, struggles at school and work, conflicts with friends and neighbors, crime in our neighborhoods and streets, wars and rumors of wars. No matter what you’re facing now or will face in the future, you can have victory. God holds victory in store for His children. He is our shield. He guards our path through life.

How do we have victory in every area of life?

“There is no wisdom nor understanding nor counsel against the LORD. The horse is prepared against the day of battle: but safety is of the LORD.” Proverbs 21:30-31

NIV – “There is no wisdom, no insight, no plan that can succeed against the LORD. The horse is made ready for the day of battle, but victory rests with the LORD.”

We experience victory in life’s battles. If life were easy and we had no natural predators, we could take it easy and just wait for God to take us to Heaven. However, we know that’s not reality. Real life is filled with dangers and battles on every side, around every corner. Those dangers and battles lead us into a special relationship with God our Father. We need Him to win. Victory rests with the Lord!

Think about the battles you’ve faced in just the past week. How many have you fought? One? Two? Ten? Twenty? Every Christian faces dozens of battles every week. If we try to fight them alone, we will eventually collapse because the burden is too great, the battles too numerous. We will NEVER have victory if we face life’s battles alone. One of the joys, one of the benefits of being a child of God through faith is God will fight our battles for us and with us.

There is no wisdom, no insight, no plan on earth or in heaven that can succeed against the Lord. That’s a fact! You and I can prepare ourselves for the battles of life, but victory rests with the Lord. He will fight and win for us. Remember our legacy, our heritage? We are saved by faith and we live by faith. It is God’s Power demonstrated through faith that wins the battles of life.

Who are we fighting? Paul tells us we have three powerful enemies in life: the flesh, the world and the devil. (Ephesians 2) That’s the fight you and I have 24 hours a day. Our final victory comes the instant we step from the mortal body to the immortal body, the second the corruptible puts on incorruption. Until that day, we fight three powerful enemies: the flesh within, the world without and the devil who surrounds.

How do we win those battles?

We win through faith! Faith has always been the key to victory. Nothing has changed from thousands of years ago. We may think we’re better off now because we live in the “modern” world, but that’s a cloak of confusion Satan has thrown around us. Mankind’s belief that we are a better society because of knowledge, technology, travel, science, rapid communication and so-called modern conveniences is just a cloak over our eyes and minds to hide the fact our society is just as lost and in need as we have ever been in the history of the human race.

Victory over the world comes to those who are “born of God.” The victory that overcomes the world is God’s Power and our faith. That simple first step of every Christian in believing that Jesus is the Son of God is where the victory over the flesh, the world and the devil begins.

So how do we take faith and turn it into victory?

“Thou therefore, my son, be strong in the grace that is in Christ Jesus. And the things that thou hast heard of me among many witnesses, the same commit thou to faithful men, who shall be able to teach others also. Thou therefore endure hardness, as a good soldier of Jesus Christ. No man that warreth entangleth himself with the affairs of this life; that he may please him who hath chosen him to be a soldier. And if a man also strive for masteries, yet is he not crowned, except he strive lawfully.” 2 Timothy 2:1-5

NIV – “Similarly, if anyone competes as an athlete, he does not receive the victor’s crown unless he competes according to the rules.” (vs 5)

We are victorious in every battle when we compete according to the rules. It’s that simple. Victory is measured by what God says is victory. The flesh, the world and the devil tell people victory is one thing, while God says it’s another. Victory in life is not based on competing by the rules of the world, but by God’s rules. We win because we follow the lead of the Winner! God tells us how He measures victory, then tells us the rules of engagement. We learn how to fight against the temptations of the flesh, the battle against the world and the spiritual war waged in the heavenlies by studying God’s Word carefully to understand the rules, then competing according to those rules.

Understand the battlefield. Wage war based on God’s rules of battle. Remember that the horse is made ready for battle, but victory is the Lord’s.

Here are some of the rules for waging a victorious battle today and the rest of your life.

“Know ye not that they which run in a race run all, but one receiveth the prize? So run, that ye may obtain. And every man that striveth for the mastery is temperate in all things. Now they do it to obtain a corruptible crown; but we an incorruptible. I therefore so run, not as uncertainly; so fight I, not as one that beateth the air: But I keep under my body, and bring it into subjection: lest that by any means, when I have preached to others, I myself should be a castaway.” 1 Corinthians 9:24-27

“Let as many servants as are under the yoke count their own masters worthy of all honour, that the name of God and his doctrine be not blasphemed. And they that have believing masters, let them not despise them, because they are brethren; but rather do them service, because they are faithful and beloved, partakers of the benefit. These things teach and exhort. If any man teach otherwise, and consent not to wholesome words, even the words of our Lord Jesus Christ, and to the doctrine which is according to godliness; He is proud, knowing nothing, but doting about questions and strifes of words, whereof cometh envy, strife, railings, evil surmisings, Perverse disputings of men of corrupt minds, and destitute of the truth, supposing that gain is godliness: from such withdraw thyself. But godliness with contentment is great gain. For we brought nothing into this world, and it is certain we can carry nothing out. And having food and raiment let us be therewith content. But they that will be rich fall into temptation and a snare, and into many foolish and hurtful lusts, which drown men in destruction and perdition. For the love of money is the root of all evil: which while some coveted after, they have erred from the faith, and pierced themselves through with many sorrows. But thou, O man of God, flee these things; and follow after righteousness, godliness, faith, love, patience, meekness. Fight the good fight of faith, lay hold on eternal life, whereunto thou art also called, and hast professed a good profession before many witnesses. I give thee charge in the sight of God, who quickeneth all things, and before Christ Jesus, who before Pontius Pilate witnessed a good confession; That thou keep this commandment without spot, unrebukeable, until the appearing of our Lord Jesus Christ: Which in his times he shall shew, who is the blessed and only Potentate, the King of kings, and Lord of lords; Who only hath immortality, dwelling in the light which no man can approach unto; whom no man hath seen, nor can see: to whom be honour and power everlasting. Amen. Charge them that are rich in this world, that they be not highminded, nor trust in uncertain riches, but in the living God, who giveth us richly all things to enjoy; That they do good, that they be rich in good works, ready to distribute, willing to communicate; Laying up in store for themselves a good foundation against the time to come, that they may lay hold on eternal life. O Timothy, keep that which is committed to thy trust, avoiding profane and vain babblings, and oppositions of science falsely so called: Which some professing have erred concerning the faith. Grace be with thee. Amen.” 1 Timothy 6

“I charge thee therefore before God, and the Lord Jesus Christ, who shall judge the quick and the dead at his appearing and his kingdom; Preach the word; be instant in season, out of season; reprove, rebuke, exhort with all longsuffering and doctrine. For the time will come when they will not endure sound doctrine; but after their own lusts shall they heap to themselves teachers, having itching ears; And they shall turn away their ears from the truth, and shall be turned unto fables. But watch thou in all things, endure afflictions, do the work of an evangelist, make full proof of thy ministry. For I am now ready to be offered, and the time of my departure is at hand. I have fought a good fight, I have finished my course, I have kept the faith: Henceforth there is laid up for me a crown of righteousness, which the Lord, the righteous judge, shall give me at that day: and not to me only, but unto all them also that love his appearing.” 2 Timothy 4:1-8

“O victory in Jesus, my Savior forever, He sought me and bought me with His redeeming blood; He loved me ere I knew Him, and all my love is due Him, He plunged me to victory, beneath the cleansing flood.”