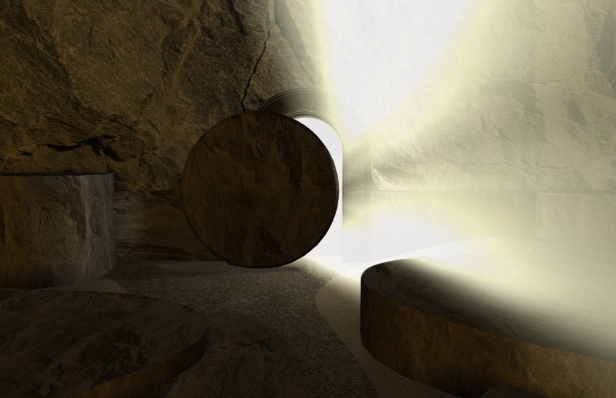 The Bible is emphatic about the Resurrection of Jesus. In fact, being a witness of the Resurrected Lord was primary to who the Apostles chose to take the place of Judas as one of the 12 Apostles. Look at what Peter said to the 120 followers of Christ before Pentecost –

“Therefore, of these men who have accompanied us all the time that the Lord Jesus went in and out among us, beginning from the baptism of John to that day when He was taken up from us, one of these must become a witness with us of His resurrection.” Acts 1:21-22

Does that sound like someone who did not believe that Jesus Christ literally rose from the dead? Peter said that beginning with the baptism of John to the day when Jesus ascended into Heave, it was vital that the person they chose to take Judas’ place be “a witness with us of His resurrection.”  The Death and Resurrection of Christ was the starting point of Peter’s great sermon on Pentecost.

“Men of Israel, hear these words: Jesus of Nazareth, a Man attested by God to you by miracles, wonders, and signs which God did through Him in your midst, as you yourselves also know— Him, being delivered by the determined purpose and foreknowledge of God, you have taken by lawless hands, have crucified, and put to death; whom God raised up, having loosed the pains of death, because it was not possible that He should be held by it … Men and brethren, let me speak freely to you of the patriarch David, that he is both dead and buried, and his tomb is with us to this day. Therefore, being a prophet, and knowing that God had sworn with an oath to him that of the fruit of his body, according to the flesh, He would raise up the Christ to sit on his throne, he, foreseeing this, spoke concerning the resurrection of the Christ, that His soul was not left in Hades, nor did His flesh see corruption. This Jesus God has raised up, of which we are all witnesses. Therefore being exalted to the right hand of God, and having received from the Father the promise of the Holy Spirit, He poured out this which you now see and hear.” Acts 2:22-24, 29-33

So, again how can Christians say Jesus did not rise? Why would they say that? When did that belief – or lack of it – begin in Christianity? Some believe it began during the 18th century as part of the “Age of Enlightenment” – and grew into the liberation theology and Christian existentialism of “liberal” and “progressive” Christianity. Not believing in the Lord’s Resurrection is just one of the foundational teachings of the Bible they do not believe. In fact, many don’t believe in the verbal inspiration of the Bible. They believe the Bible is filled with errors. They believe that many of the events in the Bible – like Creation, Adam and Eve, Noah’s Ark and the worldwide Flood – are just stories believers made up to help people understand universal spiritual truths. Some believe that much in the New Testament is mythical. They question major doctrines of the Faith – the Trinity, the Deity of Christ, the Virgin Birth of Christ, the Miracles of Jesus, the resurrection of Lazarus, the Death of Christ on the Cross, the Blood Atonement of our Lord, the Ascension of Christ, the miracles of the Apostles, the Return of Christ for His Church, Heaven and hell.

The great debate about the Resurrection of Jesus Christ and other essential beliefs of the Christian Faith began much earlier than the 18th century. In fact, they began in the 1st century. Paul, Christ’s Apostle to the Gentiles, warned church leaders to be on guard for those people “inside the Church” who would turn it upside down and try to change the very soul of its spiritual fabric. Here’s what Paul told the elders of the Church at Ephesus.

“Therefore take heed to yourselves and to all the flock, among which the Holy Spirit has made you overseers, to shepherd the church of God which He purchased with His own blood. For I know this, that after my departure savage wolves will come in among you, not sparing the flock. Also from among yourselves men will rise up, speaking perverse things, to draw away the disciples after themselves.” Acts 20:28-30

That very thing has happened throughout the history of the Church. People who call themselves Christians rise up, speak perverse things, and draw away many disciples after themselves. Many of these “savage wolves” have perverted major aspects of the Christian Gospel and taken believers captive to their teaching – and they are still around. Could any be lurking here? We say that couldn’t happen, but I hear the words of Paul to the elders of a church that Paul himself founded – “take heed to yourselves and to all the flock, among which the Holy Spirit has made you overseers, to shepherd the church of God which He purchased with His own blood.” The Church does not belong to any believer or group of believers. The Church belongs to Christ. He purchased the Church with His Blood on the Cross.

Years before Paul told the Ephesian elders to keep their eyes out for wolves in their own church, Paul dealt with a major doctrinal problem in Corinth. Some members of the church there did not believe in the resurrection. How did Paul handle it? Head on!

Paul began his portion about the resurrection by pointing Christians to the Gospel of Jesus Christ.

What is the Gospel of Jesus Christ?

What is the proof for the Resurrection of Jesus Christ?

Why do some people say there is no resurrection?

Christ is risen from the dead!

“But now Christ is risen from the dead, and has become the firstfruits of those who have fallen asleep. For since by man came death, by Man also came the resurrection of the dead. For as in Adam all die, even so in Christ all shall be made alive.” 1 Corinthians 15:20-22

“But someone will say, “How are the dead raised up? And with what body do they come?” Foolish one, what you sow is not made alive unless it dies. And what you sow, you do not sow that body that shall be, but mere grain—perhaps wheat or some other grain. But God gives it a body as He pleases, and to each seed its own body. All flesh is not the same flesh, but there is one kind of flesh of men, another flesh of animals, another of fish, and another of birds. There are also celestial bodies and terrestrial bodies; but the glory of the celestial is one, and the glory of the terrestrial is another. There is one glory of the sun, another glory of the moon, and another glory of the stars; for one star differs from another star in glory. So also is the resurrection of the dead. The body is sown in corruption, it is raised in incorruption. It is sown in dishonor, it is raised in glory. It is sown in weakness, it is raised in power. It is sown a natural body, it is raised a spiritual body. There is a natural body, and there is a spiritual body. And so it is written, “The first man Adam became a living being.” The last Adam became a life-giving spirit. However, the spiritual is not first, but the natural, and afterward the spiritual. The first man was of the earth, made of dust; the second Man is the Lord from heaven. As was the man of dust, so also are those who are made of dust; and as is the heavenly Man, so also are those who are heavenly. And as we have borne the image of the man of dust, we shall also bear the image of the heavenly Man.” 1 Corinthians 15:35-49

“Behold, I tell you a mystery: We shall not all sleep, but we shall all be changed— in a moment, in the twinkling of an eye, at the last trumpet. For the trumpet will sound, and the dead will be raised incorruptible, and we shall be changed. For this corruptible must put on incorruption, and this mortal must put on immortality. So when this corruptible has put on incorruption, and this mortal has put on immortality, then shall be brought to pass the saying that is written: “Death is swallowed up in victory. O Death, where is your sting? O Hades, where is your victory?” The sting of death is sin, and the strength of sin is the law. But thanks be to God, who gives us the victory  through our Lord Jesus Christ. Therefore, my beloved brethren, be steadfast, immovable, always abounding in the work of the Lord, knowing that your labor is not in vain in the Lord.” 1 Corinthians 15:52-58

As we approach Good Friday and Easter this year, let’s remember how important remembering these Events is to the Body of Christ. Let us not be swept away  by the world’s view of them, but may we see them through God’s Eyes and rejoice in the power of spiritual freedom we have in our Lord.

“Now if we died with Christ, we believe that we shall also live with Him, knowing that Christ, having been raised from the dead, dies no more. Death no longer has dominion over Him. For the death that He died, He died to sin once for all; but the life that He lives, He lives to God.” Romans 6:8-10

5 thoughts on “The Death and Resurrection of Jesus Christ – True or False?”