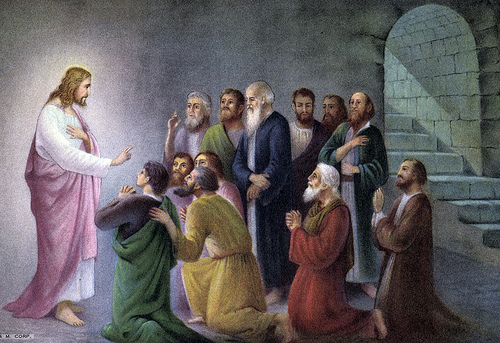 Have you heard about Saint Mark? No, not the Mark who wrote one of the Gospels in the Bible. I’m talking about every Christian named Mark. The same’s true about Saint Paul, Saint John, Saint Peter, Saint Herbert, Saint Julie, Saint Robert, Saint Al, Saint Margaret, Saint Greg, Saint Jack, Saint Teresa, Saint Henry, Saint Jeff, Saint Victoria … and the list goes on. Every Christian is a “saint.” Here’s some of what Paul wrote about them.

“To all who are in Rome, beloved of God, called to be saints: Grace to you and peace from God our Father and the Lord Jesus Christ.” Romans 1:7

“But now I am going to Jerusalem to minister to the saints.” Romans 15:25

“To the church of God which is at Corinth, to those who are sanctified in Christ Jesus, called to be saints, with all who in every place call on the name of Jesus Christ our Lord, both theirs and ours.” 1 Corinthians 1:2

“Do you not know that the saints will judge the world? And if the world will be judged by you, are you unworthy to judge the smallest matters?” 1 Corinthians 6:2

“Paul, an apostle of Jesus Christ by the will of God, and Timothy our brother, To the church of God which is at Corinth, with all the saints who are in all Achaia” 2 Corinthians 1:1

“Paul, an apostle of Jesus Christ by the will of God, To the saints who are in Ephesus, and faithful in Christ Jesus.” Ephesians 1:1

“To me, who am less than the least of all the saints, this grace was given, that I should preach among the Gentiles the unsearchable riches of Christ.” Ephesians 3:8

“Paul and Timothy, bondservants of Jesus Christ, To all the saints in Christ Jesus who are in Philippi, with the bishops and deacons.” Philippians 1:1

“All the saints greet you, but especially those who are of Caesar’s household.” Philippians 4:22

“To the saints and faithful brethren in Christ who are in Colosse: Grace to you and peace from God our Father and the Lord Jesus Christ.” Colossians 1:2

“I now rejoice in my sufferings for you, and fill up in my flesh what is lacking in the afflictions of Christ, for the sake of His body, which is the church, of which I became a minister according to the stewardship from God which was given to me for you, to fulfill the word of God, the mystery which has been hidden from ages and from generations, but now has been revealed to His saints.” Colossians 1:24-26

We learn a lot about being a saint from these Bible references:

How does someone become a saint? Many religious groups “recognize,” then “canonize” believers they think God has chosen to be saints. They believe sainthood demonstrates that the canonized person performed sacrificial and holy service to God and is therefore already in Heaven and not somewhere waiting to get into Heaven.

If that’s true, why would Paul and other apostles call believers still alive on earth “saints” when it was obvious they had not died and gone to Heaven? Did the apostles get it wrong? I don’t think so.

God’s Word makes it abundantly clear that every Christian is a saint. The Greek word for saint is hagios. It translates as “holy, sanctified, set apart for holy service.” The word in the New Testament for “holy” is hagios. The word in the New Testament for “sanctify” is hagiazo and is used for anything set apart as holy for service to God. That’s what it means to be a “saint.”

Christians, every one of us, are chosen by God and set apart for and separated to holy service. Becoming a saint has nothing to do with our sacrifice on earth. It has everything to do with Christ’s sacrifice on the Cross! Christians are saved by grace through faith, “and this not from yourselves, it is the gift of God—not by works, so that no one can boast.” (Ephesians 2:8-9) So that no one can boast!

Remember what we saw yesterday about being justified? “Where is boasting then? It is excluded. By what law? Of works? No, but by the law of faith. Therefore we conclude that a man is justified by faith apart from the deeds of the law.” (Romans 3:27-28) God makes it clear that He will allow us only one boast: “But God forbid that I should boast except in the cross of our Lord Jesus Christ, by whom the world has been crucified to me, and I to the world.” (Galatians 6:14) Our boasting is in the finished work of Jesus Christ on the Cross and out of the grave. He alone deserves praise and honor and glory!

We are saints because God has set us apart to serve Him in holiness. That’s why Paul wrote this to the saints who are in Ephesus — “Blessed be the God and Father of our Lord Jesus Christ, who has blessed us with every spiritual blessing in the heavenly places in Christ, just as He chose us in Him before the foundation of the world, that we should be holy and without blame before Him in love.” (Ephesians 1:3-4)

Have you received Jesus Christ as your Lord and Savior? Did you receive His Gift of Eternal Life by Grace through Faith? Then you are a saint – set apart for holy service to the Almighty God of Heaven. Today’s another day of service for you and me to the King of Kings and Lord of Lords!