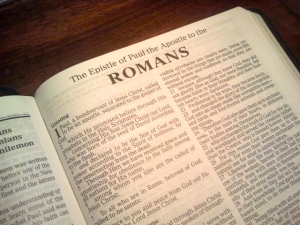 “Paul, a bondservant of Jesus Christ, called to be an apostle, separated to the gospel of God.” Romans 1:1

The Book of Romans is the “mountain peak” of the Apostle Paul’s inspired Writings. This great Book demonstrates the Power of God over sin and the astonishing efficacy of His Grace. Romans is Paul’s triumphant exposition about the truly amazing Grace of our Lord and Savior Jesus Christ. It is through Romans that we learn about the sinfulness of sin and the Righteousness of God. We learn about the wrath of God revealed from Heaven against all sin. Paul writes about the extreme penalty for sin for all members of the human race and the extreme payment for sin by God’s Son, Jesus Christ. It is in Romans that we see the horror of sin and the honor of the sinless Sacrifice of Jesus on the Cross. God is the Judge of sin. Jesus is the Propitiation for that sin. We learn through Romans that God frees sinning slaves to become forgiven saints. God is Sovereign in all the universe and the Source of all Truth.

Romans has been studied and loved by millions of people for almost 2,000 years. Here is what some of those people have written about Romans through the centuries.

“This letter is truly the most important piece in the New Testament. It is purest Gospel. It is well worth a Christian’s while not only to memorize it word for word but also to occupy himself with it daily, as though it were the daily bread of the soul. It is impossible to read or to meditate on this letter too much or too well. The more one deals with it, the more precious it becomes and the better it tastes.” Martin Luther

“The whole Epistle is so methodical, that even its very beginning is framed according to the rules of art. As contrivance appears in many parts, which shall be noticed as we proceed, so also especially in the way in which the main argument is deduced: for having begun with the proof of his Apostleship, he then comes to the Gospel with the view of recommending it; and as this necessarily draws with it the subject of faith, he glides into that, being led by the chain of words as by the hand: and thus he enters on the main subject of the whole Epistle justification by faith” John Calvin

“This epistle to the Romans is placed first, not because of the priority of its date, but because of the superlative excellency of the epistle, it being one of the longest and fullest of all, and perhaps because of the dignity of the place to which it is written.” Matthew Henry

“The chief design of this epistle is to set in a clear light the doctrine of justification: showing against the Gentiles, that it is not by the light of nature, and works done in obedience to that, and against the Jews, that it was not by the law of Moses, and the deeds of that; which he clearly evinces, by observing the sinful and wretched estate both of Jews and Gentiles: but that it is by the righteousness of Christ imputed through the grace of God, and received by faith; the effects of which are peace and joy in the soul, and holiness in the life and conversation: he gives an account of the justified ones, as that they are not without sin, which he illustrates by his own experience and case; and yet are possessed of various privileges, as freedom from condemnation, the blessing of adoption, and a right to the heavenly inheritance; he treats in it concerning predestination, the calling of the Gentiles, and the rejection of the Jews; and exhorts to the various duties incumbent on the saints, with respect to one another, and to the world, to duties of a moral and civil nature, and the use of things indifferent; and closes it with the salutations of divers persons.” John Gill

“This is St. Paul’s magnum opus. Here we see him at his greatest as a constructive thinker and theologian. The Epistle to the Romans is the complete and mature expression of the apostle’s main doctrine, which it unfolds in due order and proportion and combines into an organic whole. For the purposes of systematic theology it is the most important book in the Bible. More than any other, it has determined the course of Christian thought.” G.G. Findlay

“In studying it [Romans] we find ourselves, at every word, face to face with the unfathomable.” Frederic Louis Godet

“No man verily can read it too oft or study it too well; for the more it is studied the easier it is, the more it is chewed the pleasanter it is, and the more groundly it is searched the preciouser things are found in it, so great treasure of spiritual things lieth hid therein.” William Tyndale

“This is the greatest, in every sense, of the apostolic letters of Paul; in scale, in scope, and in its wonderful combination of doctrinal, ethical and administrative wisdom and power. In some respects the later Epistles, Ephesians and Colossians, lead us to even higher and deeper arcana of revelation, and they, like Romans, combine with the exposition of truth a luminous doctrine of duty. But the range of Romans is larger in both directions, and presents us also with noble and far-reaching discussions of Christian polity, instructions in spiritual utterance and the like, to which those Epistles present no parallel, and which only the Corinthian Epistles rival.” The International Standard Bible Encylopedia

To me, once a mocking atheist, the Book of Romans is a “soul feast” – dining on the most pure and perfect doctrinal delights. The man who led me to the doorway of God’s forgiveness through the great Sacrifice of His Son Jesus Christ quoted from Romans as he explained the great Gospel of God. I learned from God through the writings of the Apostle Paul that I was hopelessly lost and desperately in need of salvation. I, like all other people on earth, was a sinner. I had sinned and fallen short of God’s glory. The Holy Spirit did His Work of convicting me of my sin, so I was ready to hear the Gospel of God.

“But now the righteousness of God apart from the law is revealed, being witnessed by the Law and the Prophets, even the righteousness of God, through faith in Jesus Christ, to all and on all who believe. For there is no difference; for all have sinned and fall short of the glory of God, being justified freely by His grace through the redemption that is in Christ Jesus, whom God set forth as a propitiation by His blood, through faith, to demonstrate His righteousness, because in His forbearance God had passed over the sins that were previously committed, to demonstrate at the present time His righteousness, that He might be just and the justifier of the one who has faith in Jesus.” Romans 3:21-26

I was convicted and convinced by the Gospel of God, so I repented of my sin and asked for God’s forgiveness. I believed on the Lord Jesus Christ, was justified and redeemed, and received the righteousness of God. God passed over all the sins I had previously committed because of the shed Blood of Jesus Christ. God demonstrated His Righteousness to me and proved Himself to be “just and the justifier of the one who has faith in Jesus.” Praise God and Amen!

I am excited to share with you what God reveals about Himself and His Gospel in the Book of Romans. We are embarking on the most amazing journey together as we see sin and death, mercy and grace, love and forgiveness, and truth and life through the eyes of the Almighty God.